Software Defined Networking (SDN) and Network Function Virtualization (NFV) together promise to revolutionize the networking with unprecedented improvements in the speed of introduction of new services, programmability and reconfigurability, resource efficiency, and security posture. While early successes of these concepts have been in database applications, emerging beneficiaries are the enterprise and carrier networks, both wired and wireless. Our qualitative analysis of the SDN/NFV in the context of Army’s Tactical Networks (ATNs) uncovers significant potential but also identifies serious deficiencies in the standard SDN/NFV for this application. We identify a family of architectures, involving hierarchically distributed SDN Controllers, which have the potential of providing the promised benefits while mitigating the disadvantages. We then discuss the required research to add detail to this conceptual framework and to relate the architectural specifics and design parameters to the characteristics of the network. We briefly discuss a prototype novel SDN architecture, consistent with the Framework, for one SDN Controller controlling one network domain.

In this article, we discuss potential benefits and challenges for SDN/NFV in the context of Army’s tactical networks. We discuss a family of architectures for SDN Controllers that could meet these challenges, while providing the promised gains in programmability, efficiency, and security. We also discuss the research needed to select specifics of this architecture as functions of the characteristics of the network.

The separation of control and data (forwarding) planes and the centralization of control functions in a controller are defining characteristics of SDN. The key characteristic of NFV is running multiple networking functions in one general purpose hardware platform as Virtual Machines (VMs) or Containers. In this paper, we will use ‘SDN’ to denote SDN and NFV together.

The separation of control and data planes allows a representation of all of the lower level networking infrastructure as an abstraction to the higher level control and management functions residing in the SDN controller, thus allowing introduction of new services without knowing the specific technologies of the underlying infrastructure. The result is a very high degree of programmability, which allows rapid service development and deployment, easier reconfigurability, and interoperability among diverse networks. In fact, many consider this programmability (and not the separation of forwarding and control planes) the defining characteristic of SDN [1]. With NFV, VMs and resources available to each VM are defined dynamically. In addition, a VM or one of its functions can be moved rapidly from one HW platform to another. Collectively, they permit rapid reconfigurability and adaptability, improved resource efficiency, scalability, redundancy, and security. 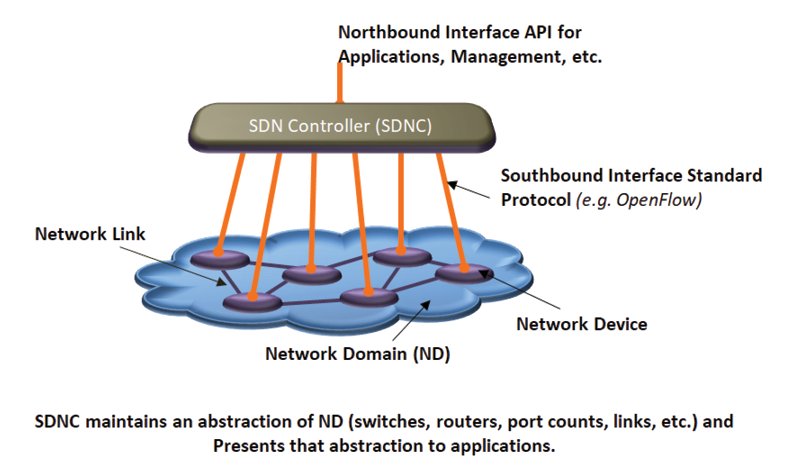 Control decisions are made by the SDN Controller based on the status of the network infrastructure and then communicated to the infrastructure nodes for actions. Thus, effective functioning of the standard SDN requires significant amount of information transfer between the SDN Controller and the network infrastructure and this information transfer needs to happen securely with minimal incremental latency. High availability, low latency, and secure communication are thus very critical.

Army Tactical Networks (ATNs) exhibit some unique characteristics. There is a strong hierarchy, mimicking the hierarchy in the force structure There are multi-hop peer-to-peer wireless communication networks (MANETs) within some layers of hierarchy. The data rates in the lower levels of hierarchy are typically low and connectivity is unpredictable. Many devices have limited energy supply. Devices may not have physical protection and may operate in enemy territory. The device could be captured by the adversary, thus providing authenticated access to malicious actors. Unit Task Reorganization (UTRs) are frequent and there is a need for supporting multiple classification levels. Virtual Private Networks (VPNs) are routinely used but are manually configured. A natural question is the value of SDN in such an environment.

In addition to the general benefits mentioned above, SDN can help automate VPN establishments, UTR execution, and distributions of security certificates and patches. It can also improve Network and Cyber Situation Awareness and deployment of policies. On the other hand, unpredictable connectivity and low data rates are perhaps the biggest challenges for the deployment of standard SDN in ATNs since the standard SDN relies on very frequent communication and information transfer between the SDN Controller and network devices. Other big challenges stem from a highly centralized architecture making the SDN Controller a single point of failure as well as the target of cyber-attacks.

As discussed below our proposed family of architectures addresses the above challenges and minimizes the reliability and security risks associated with a highly centralized SDN architecture.

We discuss the work that needs to be done to add specifics to this architecture, relate design parameters to network parameters, prototype key components, and provide early validation. 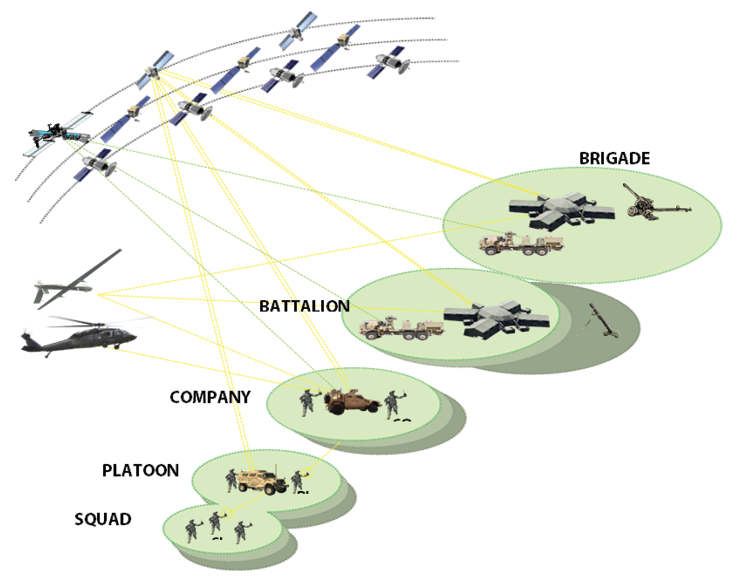 SDN enables abstraction of the network infrastructure and data plane in the SDN Controller (SDNC) so a multi-technology, multi-vendor infrastructure is presented to higher layer applications and management functions as a unified network in a standard format. NFV allows creation of multiple virtual entities (VEs) on a single general purpose hardware platform. VEs can be implemented using Virtual Machines (VM) technology [2] or the lighter weight Containers (CONT) technology [3].

As mentioned earlier, we will use ‘SDN’ to refer to SDN and NFV together.

The above properties of SDN enable the network to be ‘softwarized’ and ‘virtualized’ at the SDNC. The following are key benefits:

Overall, SDN could do for the network infrastructure what the host virtualization has done for the computing infrastructure, namely make the complex network topologies and architectures vendor-independent, easier to monitor and manage, and efficient to operate. While the Southbound interface (between SDNC and network infrastructure) has been standardized (OpenFlow and other solutions), work is ongoing to define the Northbound interface (between SDNC and applications) standards. Applications development and deployment, network management, and configurations could then be much simpler, faster, and cheaper. The combined North and Southbound interfaces will also facilitate development of a common situation awareness, specification and deployment of network management policies, implementation of distributed firewalls, and defense in depth.

Of course, SDN raises concerns about the centralization of controls, resulting in a single point of failure, an attractive target for cyber-attacks, and a traffic bottleneck. In particular, the effectiveness of the standard SDN architecture relies on secure, reliable, and high speed connectivity between the network infrastructure devices and the SDNC.

Figure 2 shows a schematic of ATN architecture. ATNs reflect the hierarchy in Army’s force structure, starting from individual soldier to squad, platoon, company, battalion, brigade, division, and corps. Higher levels of ATNs provide connectivity to the enterprise network. ATN is divided into Lower Tactical Internet (LTI), Mid-Tier Tactical Internet (MTTI), and Upper Tactical Internet (UTI). Within each level of hierarchy at lower levels, Line Of Sight (LOS) connectivity is typically provided by distributed wireless mesh (MANETs) with thin connectivity outside the mesh. Multiple MANETs exist at a given level. Inter-MANET connectivity Beyond Line Of Sight (BLOS) could be provided by SATCOM or other communications relays. At higher levels of hierarchy, there is a mix of terrestrial wireless, SATCOM, and wireline connectivity. In addition to the networks designed for people-people communications, situation awareness, and C2, there are special purpose networks for FIRE support, Logistics, medical, etc.

Virtual Private Networks (VPNs) are used extensively in ATN. Manual setups are time and resource consuming. As the missions and tasks within a mission change, people may get reassigned to different units. These Unit Task Reorganizations (UTRs) are quite frequent in Army tactical environment. They require significant time-consuming reconfigurations. ATNs also support communications at multiple classification levels.

Data rates available within a level of hierarchy are typically low, especially in LTI and MTTI, where they range between 100 kbps and 2 – 5 Mbps. Tactical SATCOM providing BLOS connectivity also have low data rates (100 kbps – 1 Mbps). Also, individual radios are mobile and the entire MANET could be on-the-move. This mobility results in changing RF environment, unpredictable connectivity, and unpredictable data rates. Adversarial jamming adds to the unpredictability of RF links. Given that the user devices may also be network switches and routers, the network topology is governed by the user mission and not by the placement required for optimal RF links, thus increasing the unpredictability. A unit may get physically separated from the rest and may have very limited connectivity with the peer units or with the higher level.

ATNs support communications at different classification levels. Some parts of the network infrastructure may be shared among different classification levels while the others are segregated. Some segregation happens at physical layer, the other happens logically using Virtual Private Networks (VPNs), Multi-Protocol Label Switching (MPLS) and other logical isolation mechanisms.

Given the mission criticality of ATNs, a single SDNC controlling all networking functions in an entire tactical network (say, for an entire Brigade) would not be a desirable solution in any case. It would be a single point of failure for the entire network and a very attractive target for kinetic and/or cyber-attacks. Unreliable and low data rate communication between network devices and SDNC make it even more difficult to give the responsibility of very time critical control functions for a large number of users to a Centralized SDNC. Multiple classification levels add to the difficulty.

On the other hand, SDN concept may offer key advantages to ATNs, in addition to the benefits mentioned above for all SDNs:

These potential benefits motivate us to investigate SDN architectures that can take advantage of the key concepts but mitigate the concerns expressed above.

Figure 3 is a simplified depiction of the family of architectures we propose for SDN to support ATN. We have a pyramid of SDNCs. Each SDNC is assigned the primary responsibility for at least one Network Domain (ND) and uses a standard southbound protocol (such as OpenFlow) for communication with network devices in that ND. This relationship between an SDNC and ND is as shown in Figure 1. An ND may span one or more levels of the ATN hierarchy. Peer SDNCs are responsible for peer NDs. These peer SDNCs communicate among themselves using the emerging SDNi protocols. SDNCs at a higher level of the pyramid control higher levels of the ATN hierarchy. SNDCs between levels could also communicate using SDNi but the content may reflect the hierarchy. In addition to the primary responsibility for an ND, an SDNC also acts as an indirect higher level Controller for the tree of SDNCs subtending to that SDNC. Figure 4 illustrates direct and indirect control domains of an SDNC. 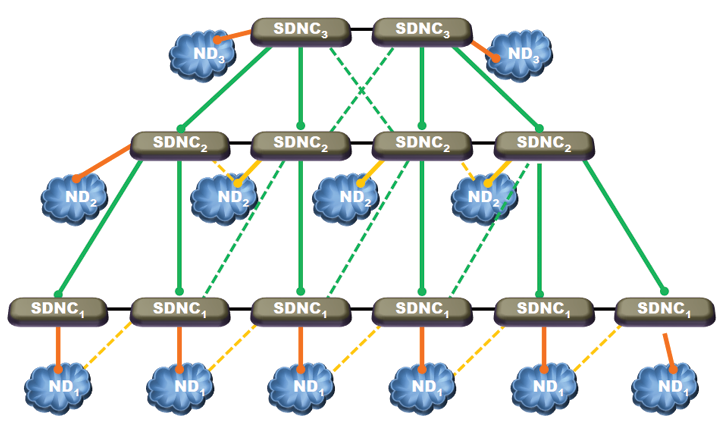 We now highlight several important features of this family of SDN architectures. 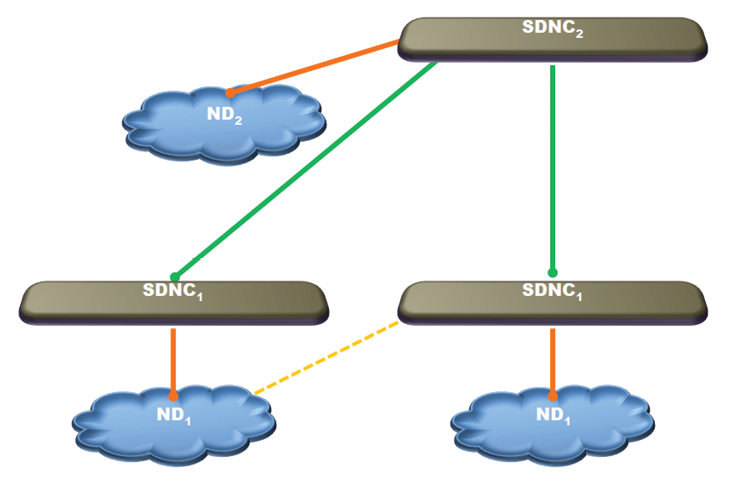 As discussed above, NDs at tactical edge (e.g. LTI) may keep some control functions in the forwarding plane. As an example, we consider a hybrid architecture where the mobile nodes in such an ND have local autonomy in making forwarding decisions and SDNCs perform less time critical functions like the following: 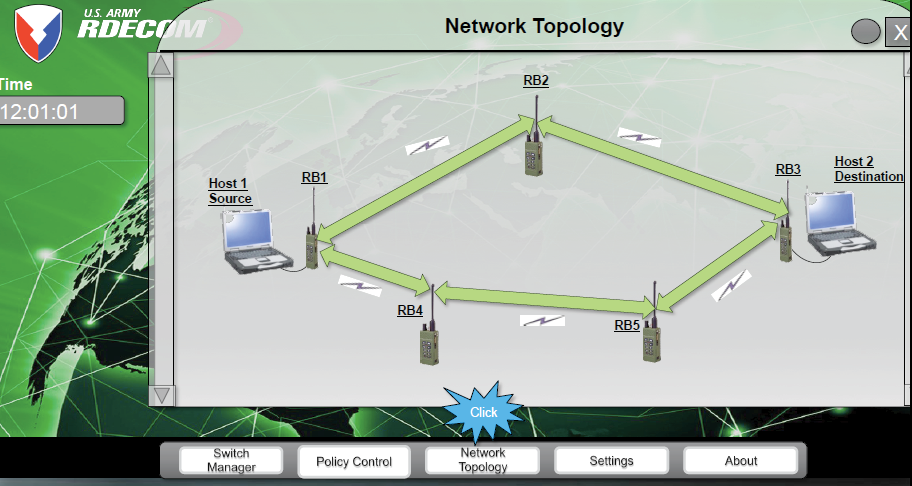 The control plane consists of a combination of the locally run IS-IS protocol and policy based instructions delivered by the SDNC. Flow Table entries are updated by both the IS-IS protocol and by the SDNC policies. SDNC updates to Flow Tables occur at a slower time scale than IS-IS updates. When there is conflict between IS-IS updates and SDNC updates, the SDNC updates generally override the former, subject to stability constraints.

This hybrid capability is currently being tailored to support scenarios where wireless nodes are automatically reconfigured (IP addresses, frequency spectrum, keys, etc.) based on the requirements of a newly imposed task on the network.

Broad Set of Questions to be Addressed

Section 5 describes a single SDNC and single ND architecture with basic routing function in the data plane, which could be advantageous in some NDs in ATN, especially in LTI. The long term goal is to architect the multi-controller SDN for the entire ATN. The family of architectures and functions defined at a high level in Section 4 (Figure 3) above provide a good starting point for discussing the broad set of questions to be addressed: